And that was it. That was all there is. If you thought there was going to be some interesting twist you would be sorely disappointed. I could not begin to express the disappointment I felt the instant I finished this book. Everything- and I mean EVERYTHING; every cliche, every horror scenes, everything was already done over and over and over and over again.

Let's start with the characters. All I can say was that the good girls had OK personalities while the bad girls were stereotypical bitches. But all of them were so forgettable I don't even care if they died agonizingly in the book.

The main character, Dahlia, was OK; she has personalities but she didn't create a lasting impression on me. As usual with main characters in an unimaginative horror plot, she was just there to be scared shitless. There were plot of rivalry, girl fightings, bullying and such but don't be deceived... Because none of these issues were important for the readers to care. The horror scenes were atypical of our local Malay horror films as well so I don't know what I should talk about. The only redeeming point of this book was the headhunting plot, but even that plot was so paper thin and forgettable. Everything I read here was everything I watched on local uninventive, horror films. There was nothing new, nothing to make me excited.

The author tried too hard on trying to interest readers of the Sabahan community setting and culture. You see, I stopped caring for immersion since the Sabahan characters would sometimes spoke in Sabahan dialect and sometimes in KL dialect (?). Yet he tried to put into as many Sabahan stuffs he could into the story it was getting pathetic.

You know, if you wanna write about our culture just let it flow naturally... Show us the girls competing in a Unduk Ngadau contest without the infodump about what and why Unduk Ngadau is an incredibly special event. There was no need to impress anyone, we're just a different culture. Just show, don't tell. It is OK to write Unduk Ngadau without explaining that it is a beauty contest. You can use many other ways to tell readers what it is rather than going all infodump on us.

Every time you had to break the line just so you could tell the readers about what is a headhunter and what they do and why they do it, you're ruining the mood. Use the characters so that we could understand their motivation with headhunting, don't just tell. Let the readers figure things out themselves. You just had to write it in a way readers would understand what it was you're talking about. You know, don't tell us things, rather help us to relate.

In conclusion, this story was written in such a cliched way, with the cultural theme written off as nothing more than a decor to the uninteresting plot. Read this if you're not a horror fan and haven't been watching or reading many horror stuffs, perhaps you might still be scared or excited.

Oh, and by the way, it's Huminodun. Not Himanodun. You can Google the name. There was no other spellings. Seriously. Fixi needs to fire their editor.
books

Yes, this is a Malay book, but I am still going to review it in English because I CAN.  Di Sebalik Dinara is a Malay sci-fi fiction that is also a part of Form 4 Bahasa Melayu komsas reading. I am not a Bahasa Melayu expert and have zero experience in the subject teaching. But as a teacher, you just need to be flexible and improve your inconveniences. That was why I made this Saturday's mission to finish this 227 page book, in order to understand the story, know the characters, the plot, theme, settings and everything else so I could discuss and teach it to my students. At first, I was really glad that the literature component for this year was not some cliched Malay, Chinese, and Indian friendship themed story in a simple kampong vs city lifestyle morality setting. God I'm so tired of that crap. My kids are creative and they deserved better. That was why I was elated with this book since it was not always you get to find a Malay sci-fi fiction as a high school readi

Journey to the West: My Childhood, An Unforgettable Classic

The first adaptation of Journey to the West that I had ever watched was the 1996 TVB's show starring Dicky Cheung as the famous Monkey King. I was about 10 to 11 years old and the show was running on NTV7, airing both seasons in a row, in which Benny Chan portrayed Sun Wukong for the second season. This is one of those unforgettable shows from my childhood that has quite a nostalgic effect on me. Even right now, at the age of 22, I'm still a huge fan of this epic Chinese classical novel that I keep tab of every news about remakes on the shows. Of course there are many remakes, and it is not possible for me to have watched or include everything in this post. So, I'll just show you the ones I've already watched, or watching, and some I wanted to get my hands on in the future. (Note: list not according to years) I've already watched: 1. TVB's Adaptation 1996's Journey to the West  1998's Journey to the West These were the sh 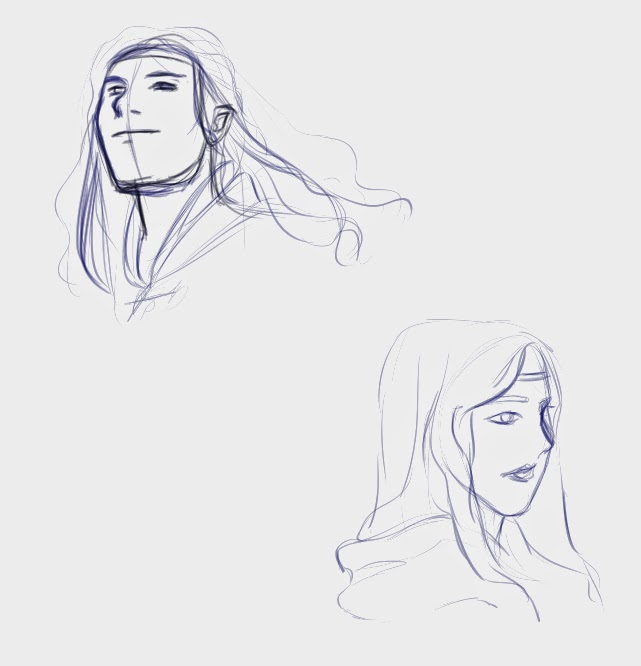 I usually do this post on my other blog, but I really wanted to share this one out to other fans though. So, I just thought one day about this elf-human romance in LOTR world and realized almost of 'em are between a male human and a female elf. I searched if there was any romance involving a human maiden and a male elf. And yeah, there was one; of Aegnor and Andreth. Like many others, their story was melancholic in nature (in my opinion), but unlike others they didn't get to be together since they were living in a difficult age. I don't know why I went looking for romance in LOTR, still... I spent two hours on Mischief with my trusty tablet and just drew~ So, I started out with a rough sketch of how I though Aegnor and Andreth looked like according to their description in the book via Wikia (it's hard to find Tolkien's other books here apart from LOTR and The Hobbit). I opted for black and white sketch instead of coloring, because I'm in love wit